The rising occurrence and severity of natural catastrophe events can be linked back to global climate change.

Tobias Grimm, senior manager: climate at Munich Re, says that climate change is responsible for both the expanding geographic footprint of tropical cyclones and the intensity of resulting storm activity. The phenomenon is thought to increase the amount of rainfall during extreme weather events on the one hand – and make it more likely for severe drought events on the other. Mr Grimm was speaking at the African Insurance Exchange (AIE) Conference held in Sun City.

Munich Re has an extensive database of natural catastrophe events (showing both economic and insured losses) dating back to 1980. The global reinsurer is now using this data to estimate the impact of rising global temperatures on individual loss events. Mr Grimm referred to two tropical cyclones that tore through Mozambique in March and April 2019 to illustrate how climate change is reshaping the natural catastrophe landscape.

The first of these was Cyclone Idai, a category three cyclone that laid waste to the port city of Beira and claimed more than 1000 lives. Maps produced by the global reinsurer’s natural hazards assessment tool called NATHAN confirms that Beira is prone to cyclones, he said.

The second one, Cyclone Kenneth, was a category four cyclone that lashed the northern parts of Mozambique with windstorms exceeding 230 kmph despite NATHAN showing this area as having a low chance of cyclone occurrence, or even to be hit by one of the most severe cyclones ever recorded in Southern Africa.

“Climate change tends to spread the territory for tropical cyclones and we increasingly see such events in regions that were not previously exposed,” said Mr Grimm. “In areas that are prone to cyclones our observation is that the frequency remains similar but that the intensity of the ensuing storms is far greater”.

Munich Re confirms the evidence of climate change. “We have seen an increase in mean temperature on a global scale of approximately +1°C since the start of industrialisation,” said Mr Grimm. He added that current temperature trends suggest a +3°C world by the end of the 21st century with a worst case of +5°C. Sea levels are rising in line with temperatures as glaciers and polar icecaps melt. A century ago the sea level rose about 1cm per decade, nowadays it is rising 4,5cm over the same period.

Climate scientists have studied events as diverse as Hurricane Harvey in the US and the severe drought in the Western Cape, South Africa, to determine to what extent climate change ‘magnified’ the natural catastrophe event. Their conclusion was that 38% of the rainfall amounts during the US hurricane in 2017 could be directly linked to climate change. As for the Western Cape drought, Mr Grimm reported on a recent study indicating an increased climate change-induced likelihood of such a multi-year dry spell by a factor of three.

Reinsurers focus on extreme weather events because they account for the bulk of natural catastrophe insured losses, with around 70% due to storms and another 20% to other weather-related events. The challenge facing insurers, reinsurers and risk managers is to continuously monitor climate-related risks, measure them and to develop appropriate risk management strategies in view of rising economic and insured losses. Also, insurance gaps play a vital role in many markets.

Munich Re is withdrawing insurance support from new coal power stations and investing in low carbon technologies. And there has been widespread support for the zero emissions goal introduced via the Paris Agreement, signed in 2015. A recent G20 initiative known as the Taskforce on Climate-related Financial Disclosure (TCFD) could make it mandatory for companies and industries to disclose their climate risks.

“Risk mitigation in the natural catastrophe space is core to our business,” concluded Mr Grimm. “We maintain our leadership in this field by providing new services and sharing our expertise and knowledge with our customers. Additionally, we develop new risk transfer solutions by making low-carbon technologies faster bankable and competitive.”

AFRICA AHEAD IS A SIGNATORY OF

Africa Ahead Issue 086: African reinsurers ready for challenges ahead in 2023 - https://mailchi.mp/afahpublishing.com/africa-ahead-issue-001-water-supply-risks-threaten-business-continuity-5384056 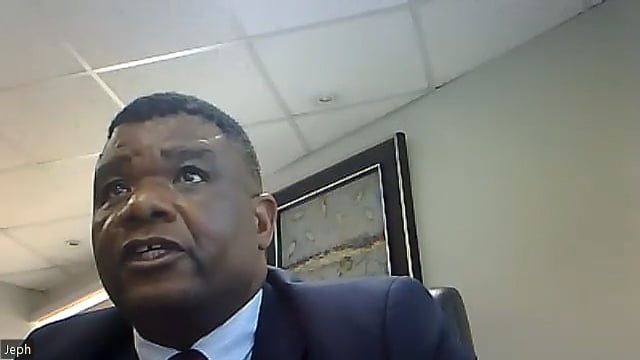 VIDEO: African reinsurers ready for challenges ahead in 2023